All my feelings of excitement had to take a back seat while the seriousness of provisioning enough healthy food and supplies for a week long sailing trip took the wheel. Lucky for me Steve had done this many times before, so I was basically learning what to buy that would keep without a fridge. Oh yeah Sorsha doesn’t have a fridge, like many boats. So it was a case of veggies, veggies, and more veggies, fruit, rice, pasta, herbs, spices etc. I had never seen so many veggies or a market like Nadi’s. So the entire experience I felt like a real amateur being thrown in the deep end next to this experienced and seasoned sailor. However I did have one skill he didn’t – bargaining/haggling/procuring. My parents taught me from when I was old enough to talk that “you can’t beat a bargain.” Also I had just come out of a job where I procured all parts, material, safety gear, plant and equipment etc for an Australian LNG Pipeline.

We tried to buy all our provisions from the traditional Fijians and not the Indian Fijians as it seemed that they were a little more hard done by, and we wanted to help the community as much as possible with our purchases instead of giving more money to the already rich. It was easy to tell. The well off vendors had nice sheltered stalls like this one above, the others sat on the ground, outside, under the conditions. Heat was a problem on this day. Scorching hot! Some vendors had makeshift shelters to sell under, constructed with tarps, ropes and sticks. But it was still hard to see Fijians making their living this way..

I was glad when it was over and we got to enjoy a yummy fresh coconut water from inside the back of our loaded up air conditioned taxi. The driver pulled over and treated himself so we thought we would too…it was only $1AUD. 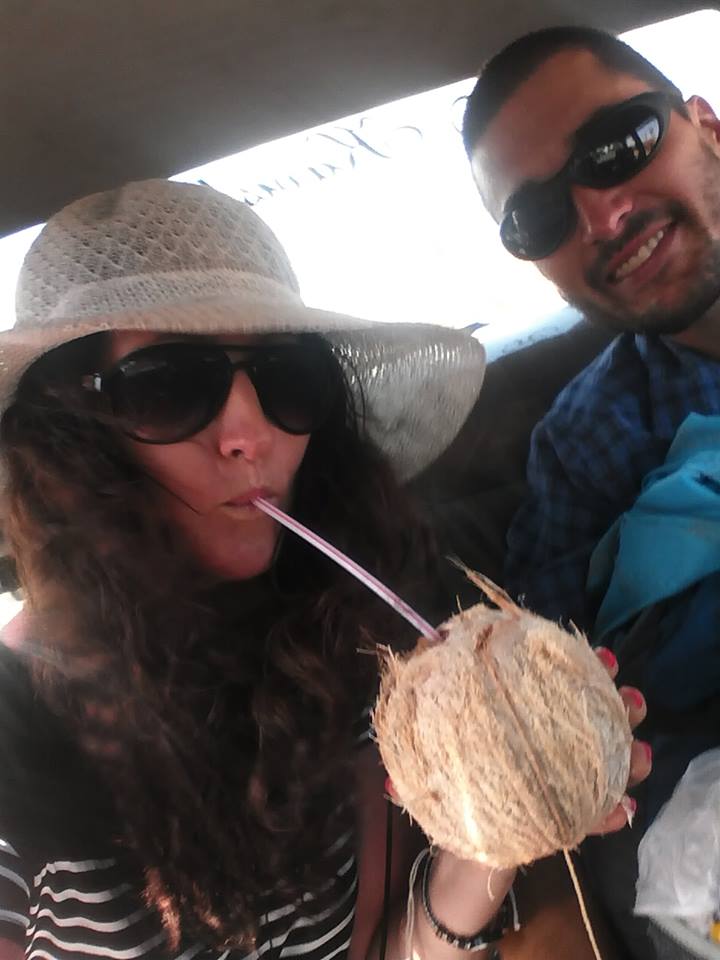 Provisions for one week cost about $50AUD per person, including a couple of bottles of rum! Without the alcohol it would be much cheaper, but we were definitely in party mode. So for one week of sailing it was still only about $100AUD!! All food, alcohol (until we ran out), accommodation and activities. I was laughing all the way to the boat!!

Luis had been cleaning Sorsha all day, as it really did need it, and fixing little things that always break on boats. Steve and I loaded up the kitchen with all our goodies, cooked a feed and headed to the beach, to wait for Ying, a couchsurfer from Hong Kong who was joining us at 10pm that night. Flying straight in, and onto Sorsha. We would spend the night anchored out front of Smugglers and leave in the morning.

Without fail the fire dancers and cold beers from Smugglers kept us well entertained as we waited an anticipated Ying’s arrival. Was she cool? Would she speak enough English? What will she be like on a boat for a week? Plenty of people think they like sailing until they are chucking their breakfast up over the side, Steve reckoned… 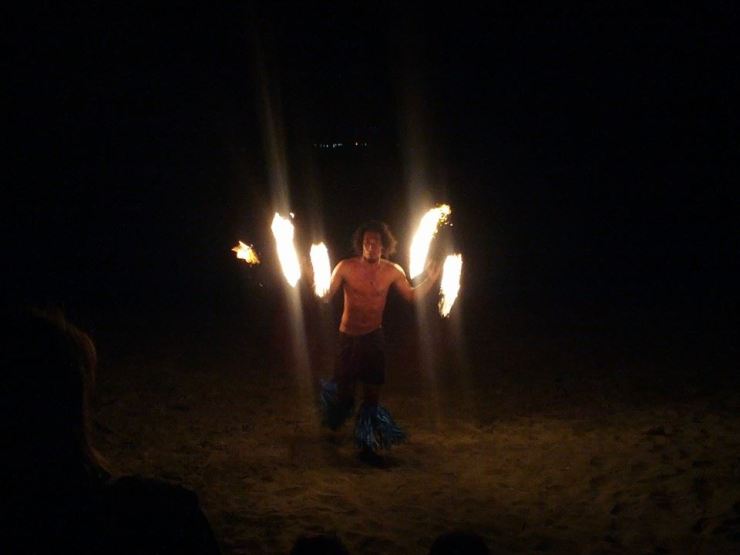 Again those fear based thoughts regarding Ying were unneeded. She was sweet, pretty, super chilled out, nothing ever bothered her and she always had a great big smile for anyone who looked her way. She was cool! Awesome, I thought as I settled into my bed, now over the moon with excitement for the early morning, when we would set sail for Namotu, infamous for Fiji’s best surf breaks.

It is about 17 miles from Nadi to Nomotu. So by 7am, we were off! The wind was picking up more as the morning went on but we averaged about 6 knots.

Nothing could have prepared me for the breathtaking beauty of Namotu! Well maybe a picture could have, but I’m pleased it was such a surprise. My first day ever properly sailing and we drop anchor here!! No way, no way, no way!! Commence pinching myself! Yep, its not a dream!! I just kept saying “Oh my god” with a dumbfounded ecstatic smile splitting my face from ear to ear! This is what I saw as we sailed in..

I looked at Steve with overwhelming gratitude that he had found me on the beach a few days earlier and thanked the universe/god/whatever it is you want to call it, for the divine intervention, regarding the tour ticket swap-ability. Ohhhh how it all just came together!!

The boys jumped into the dingy with their surf boards and zipped over to the reef where major surf competitions are held. I had only surfed a couple of times before, and Ying had never surfed, so us girls stayed behind and frolicked in the crystal clear, beckoning, breathtaking fiji/pacific ocean. Reef breaks are no place for a beginner surfer.

The boys came back with a few scratches from grinding the reef but I could tell Stephen had the time of his life. Bragging about how few people were out there and he actually had room to surf, for once. I guess being from San Diego where its super crowded to surf, this was paradise. And it is – look at it!!

As if the day couldn’t get any better we then pulled the anchor up and sailed over to “Cloud 9” a floating bar!!! We enjoyed some pricey $10 beers (still not that bad though for a floating bar in the Pacific Ocean, only accessible by boat).

There were multiple punters there the day we got to experience this incredibly amazing bar. Definitely my most favorite in all 23 countries I have visited so far. Other sailors were jumping off the sides of the railing into the sparkling baby blue water below without a second thought. Just hutt, hutt, hutt, over the top and into the water. It took myself and Ying quite some time to work up the courage but we did it in the end. 🙂 What bar do you know where you’re actually allowed to jump over board? Where you even have that option?

If that wasn’t enough for ya’ll, check out the chill spots for the ladies and these sick sunset shots! Oh my god!!

That night the Sorsha Crew drank a bottle of rum, danced and sang on the deck like a bunch of drunken pirates to The Red Hot Chilli Peppers, until we passed out. I might even go as far to say it was one of the best days of my wee little life!!

Of course the next day we all had sore heads, but it was totally worth it. Steve pulled up the anchor as I watched closely at everything he was doing. More than eager to learn to sail myself. Especially now I had seen how divine it could be! As I practiced tying a bowline, that Steve had shown me earlier, suddenly it was time again to drop anchor again. We had reached out next anchorage where we stayed for a couple of nights, partying, snorkeling and exploring Navadra Island.

Steve had a paddle board, so the three of us minus Captain Luis, broke a paddle board record jetting over to the island in under a few minutes. At least we thought so. Luis took the dingy or swam over. I sat on the front and paddled, Ying sat in the middle and pushed the sides with her hands, cupping the water, and Stephen swam behind the board, holding onto the rear end with his arms and kicking us like a human propeller.

It was so strange to explore an island where the only other breathing creature around was likely a mountain goat. There was another boat, a catamaran, but they rarely came outside. That’s the problem with having a million dollar catamaran, they are so nice inside, like a floating apartment that some people just want to stay inside….come on guys!! 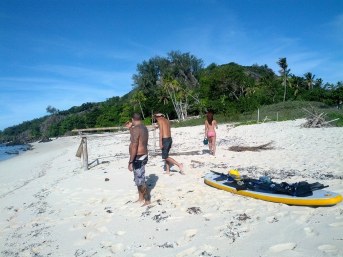 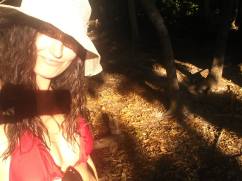 One night Stephen jumped into the water and showed Ying and I what happens when you make a starfish angel shape with your body among phosphorescent Plankton. I didn’t manage to snap a photo because I was too busy having my mind blown and laughing. Imagine a snow angel, but a phosphorescent plankton angel. It looked like many blue/green glowing swirling stars around Steve’s body. These were in deep water right off the boat. It blew my freaking mind!

Our last stop was Octopus Resort on the Main Land Island of Viti Levu, 24 kilometres north of Nadi. Punters paid for all inclusive tours to stay here. Just like the tour I managed to escape to have the above adventures! Thank you universe! They in return for their pretty penny’s receive nightly entertainment, of Fijian traditional dance, dinner, drinks, breakfast, accommodation and they get to play on the beach all day, snorkel, swim etc.

When you rock up on a boat however, you get all this for free! Minus the dinner, drinks and accommodation. But we managed to talk the staff into letting us eat there, most people are sympathetic to poor hard-done-by sailors. Ha! Not for free, for a fee, but it was an awesome seafood dinner!

Steve and I actually camped on the beach in his tent so we could have some alone time, and leave Luis and Ying to it, yep you read that right. Long story lol! Anyway we dropped anchor out front of Octopus Resort after a bit of rough sailing, and went straight to the bar. We had necked all our rum the day before watching plankton and Steve :).

The sunset off of Lautoka Island did not disappoint. The Fiji Islands are just too amazing! Writing about it now brings back massive nostalgia! They really are magic!

We were entertained late into the night by these beautiful dancers in their traditional clothing. Apologies for the photo quality.  They had the entire crowd dancing, minus Steve and Luis, around the pool in lines. So awesome!

The next morning Steve and I acted like we owned the place. Walked in there and had a free buffet breakfast, of fruit, eggs, toast, tea, coffee, the works! The staff can’t tell who is a drunken sailor and who isn’t…

So how does the story end? It doesn’t for me. Ying flew home to Hong Kong and I was asked to sail to Asia with Steve and Luis. Of course I jumped at the opportunity. But first we had more of Fiji to see!!

Fiji has a special place in my heart – an unimaginable beauty where sometimes times stands still, because your on “Fiji Time” which pretty much means like the Spanish’s “mañana” (tomorrow), everything will be completed when it is supposed to be, in a chilled out, laid back manner. No rat races allowed! The people are lovely. The New Zealand and Australian dollars are strong here, making most things that much more affordable. And the weather is sunny and warm all year round. However if you’re sailing – typhoon season in Fiji is between November to April. The best time to visit as a roamer is anytime! It’s perfect for beach holidays as it has a warm tropical climate. The Maximum temperatures rarely move out of the 31°C (88°F) to 26°C (79°F) range all year round.

Keep it real roamers, you’re on Fiji time for the next few posts.