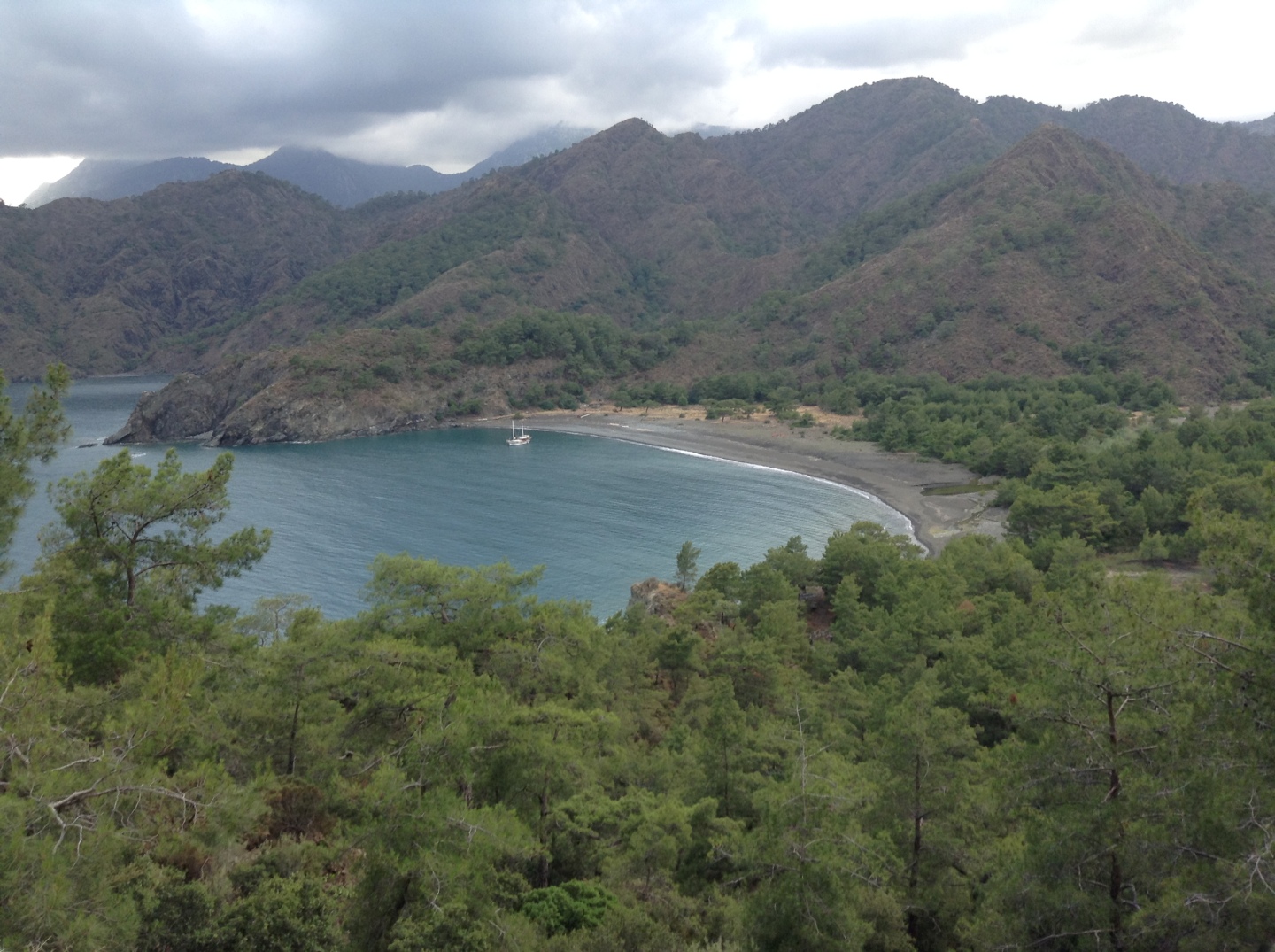 The Lycian Way is (approximately) a 540 km, 29 day long, hike along Turkeys stunning southern coast of ancient Lycia. Steve and I planned to do 2 weeks -14 days but it was so scorching hot we only managed 5 days from the 26th – 30th of May 2015 and 2 more days later on.

It stretches from Ölüdeniz, near Fethiye, to Geyikbayırı, about 20 kilometres from Antalya. The track is way-marked by red and white stripes along various rocks, tree trunks, sticks, or whatever seemed reasonable to who ever was tasked with the job to slap a bit of paint about the place. Often times, there was more than one marker and we wandered off the wrong way only to be met with a plunging cliff face, but retracing our steps were usually simple enough to manage without too much frustration. 🙂

Steve and I decided to catch a bus all the way to Antalya from Fethiye where had left our larger belongings and could catch the ferry over to Greece, upon returning. Also I had made some friends in Antalya whilst checking the charming little seaside city out on my own weeks earlier.

After purchasing some new kicks, and hanging with our new friends in Antayla for a couple of days we hit the road to find our starting point.

Day 1 – We set off to Tekirova – ready, eager and with a brand new pair of comfy fitting bright orange shoes for me. 🙂

The Mountains rise sharply from the jagged rocky coast, allowing amazing views of the Mediterranean Sea from the varied hiking tracks. Think forestry green rolling hills, with a few pointing peaks surrounded by fogging candyfloss clouds, the ever present smell of pine needles, that remind you of Christmas, if you were lucky enough to have a real tree inside the house. Sparkling transparently blue/green water miles below or at your very finger tips. Rocks peering back at you that almost look like they are inviting you in to enjoy and absorb the cool bliss, just as they are. Sometimes we even caught glimpses of a few cheeky fish, checking us out or trying to tell us something? These are the most enjoyable sections of the track. When you are so alone that you actually think rocks, fish, birds or whatever are trying to say something to you – if only you could speak their language?! Or maybe that was the “motivation” playing tricks on my mind..

Of course after a few days – depending on where you start you will run into heavy coastal tourism and high-intensity agriculture is crowded onto the deltas, but it was nice to see civilization again.

Steve always takes his tent when he goes hiking, and we had every intention of stringing it up and cracking out the wee cooking stove and our famous camping pasta – that somehow tastes like its on another level. It’s something about working hard all day, sweating up a storm, setting up the camp, cooking on a good old fashioned camp fire/stove that give it that special IT factor. Or maybe it just tastes amazing because you are so dam tired and anything hot would be mind blowing? Same same, but different. So anyway after hiking all day we decided to get a hotel room as camping in the small yet surprisingly touristy town of Tekirova was really expensive. Also the weather really was crap, I’m talking buckets of rain, so we choose relaxation station instead!  A.k.a A real bed!

Day 2 – Waking up rested, Steve and I take a day hike to Phaselis Ruins and a bus back to Tekirova from Camyuva.

Hiking over to the ruins from the bus stop consisted of friendly beach horses, beaches, more specular views, more cliffs and a few rowdy Gullets (tourist schooners/boats) that crank the be-Jesus out of their stereos all-day-long. Kind of ruins the scene of the ruins but there is always a trade off with everything and they don’t usually stay too long…

Phaselis was the most important harbour city of eastern Lycia and an important commerce centre between Greece back in 700 BC. This is because of its unique location on an isthmus separating two harbours. It was set up by the Rhodians and later conquered by the Persians and Alexander the Great.

“Today Phaselis has three harbours: the ‘Northern Harbour’, the ‘Battle Harbour’ and the ‘Protected (Sun) Harbour’, of which the last is the most important today. A 24-metre-wide ancient street runs through the middle of the city. The ‘Hadrian Waterway Gate’ is on the southern part of the street. There are ruins of shops and stores on the sides of the street and near these are ruins of public places such as Roman baths, agoras and theatres. These structures are dated to the 2nd century BC. There are water canals between the town centre and the 70 m plateau. There are also numerous sarcophagi.” – Wiki.

The photos speak for themselves below.

Day 3 – Stocked up on food for the first night of camping and headed for the big beach before cirali.

This was a fairly easy day – we saw a scorpion and enjoyed a nice swim and lovely night sitting by the fire until we crawled into bed.

This was my favourite day of the week! Well, kind of week… I knew it was the last big stretch until we were in Crali and after that we only had to walk down the massive beach to Olympus. I was Europhic! The track was right along the coast side, the temperature was perfect and there were constant day hikers coming past us from the opposite direction to see the beach we had swatted on the night before – legally I might add. Hooray for turkey! Some had kids in tow and one couple even had a back pack especially to put a toddler or infant in. Technology! 😛 We stopped and chatted to most of them before carrying on and wishing them the best. There is something about meeting people on a trail that is so special. I think it’s the mutual respect you have for each other for getting outside and enjoying this beautiful world we live on/in, even though it’s not always fun and can be extremely challenging mentally and physically.

We had another night camping on a breathtaking Lycian beach. We were actually told in the morning that we could not camp on this particular beach but hey what’s done is done right? This beach is super long, at the far end is the entrance to the legendary Olympus. In the day time and up until sunset you can find groups of hippies chilling and tripping as well as normal beach goes taking a dip in the freezing water (freezing in May 2015 anyway).

In true traveller style, Steve and I treated ourselves to a cup of tea out of his stainless steel water bottle that he searched for, for days, in Nepal, on the beach. Followed by a romantic candle lit dinner, that we could justify to ourselves by the camping and hiking for free on the Lycian Way. Bliss!! 🙂

Day 5 – to cabin in Olympia – we literally just walked down the beach and found a room. Not so easy actually, but we will save that story and the rest of Olympus for its own Roam.

So roamies if you liked the look of my roam on “The Lycian Way” remember trekking is best in spring or autumn – February-May or September-November – summer in Lycia is too hot for long walks. However I would rcommend that you go in April as even May was too hot this year! Every night you can find accommodation in village houses, pensions or small hotels. Independent trekkers will find plenty of wild camping places with nearby water. So it makes it super cheap!